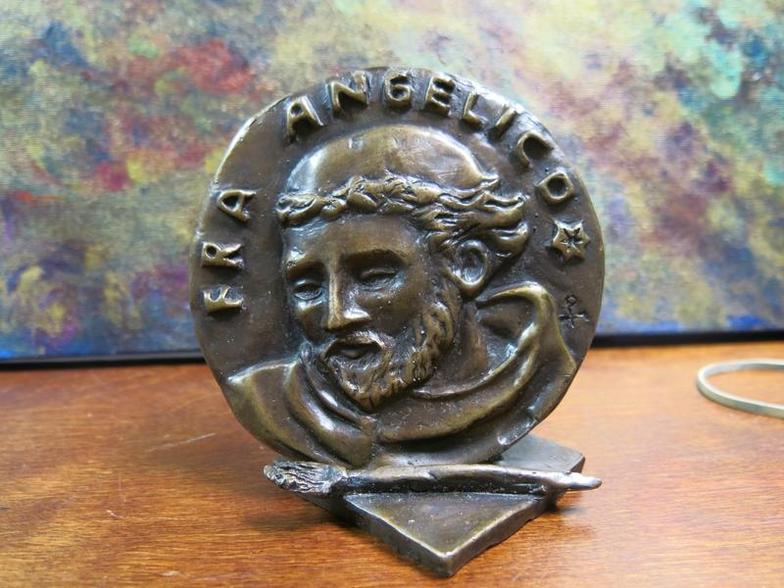 Barbara Schwarz—Multi-Media
​2014 (Adrian) Alice Van Acker - Painting
2015 (Great Bend) Elaine DesRosiers- Painter/Writer/Poet/Actress/Media
2016 (Racine) Elizabeth Slenker - stained glass/ painting/graphic design
2017 (Adrian) Janet Wright - water colorist
2018 (Adrian) Nancy Murray- Drama
2019 (St. Louis) Sheila Flynn OP- art, writing,
2020  (Zoom) Irene Mary Diones - music, photography, calligraphy
2021 (Racine) Joseph Kilikevic,OP- dance of universal piece, sacred ritual
2022 (Racine) Gerardine Mueller,OP-stone sculpture, wood, clay, mosaic, copper, enamel, stained glass, illumination, glass etching, and calligraphy
Past Fra Angelico Recipients
The Fra Angelico Award is the highest honor that the DIA bestows on one of its members. Originally the Award was carved in alabaster by Phyllis Mrozinski OP. Eventually the DIA commissioned Phyllis to cast it in bronze and clearly depict the Dominican Friar and artist, Fra Angelico. This later version sits on a bronze base with a paintbrush worked into the design to hold the medallion in an upright position.
The Fra Angelico Award is presented every year to a DIA artist who exemplifies Fra Angelico’s dedication to furthering the Holy Preaching through art.
Criteria used for this designation:
•the artist’s work is of the highest quality in his or her discipline
•it is highly honored in artistic circles
•the artist exemplifies the ideals of the DIA
2021 Fra Angelico Award Recipient
Joseph Kilikevic,OP
​Weaving involves one person taking various thread components and interlacing them together into one beautiful piece of fabric. Each of the threads is different. No one else’s fingers are deft enough to create such an intricate tapestry for others not only to visualize but also to incorporate into their lives.
Following the calls for respectful dialogue with the peoples of all faith traditions not only by the Second Vatican Council but also by the Order of Preachers, this Dominican artist has taken the different colored and textured threads of poetry, ceramics, dance and movement, sculpture, sacred ritual, painting and preaching and has interwoven them into one all-inclusive ministerial tapestry dedicated to seeking peace and unity beyond the differences that divide.
This artist has willingly shared and taught the Dominican tradition of using the body for prayer. Through the years, this process has affected thousands including the Dominican Youth Movement, Dominican Preaching Conferences and the Dominican Institute for the Arts, to name a few. The Sacred Rituals provide an alternative to our fast-paced, noise filled, multi-tasking lives bringing us back to dignity, civility, respect and tranquility.
It is with great pleasure, that the Dominican Institute for the Arts presents the 2021 Fra Angelico Award to this true son of Dominic who, has preached and shared his art his entire religious life – Dominican Friar of the Central Province, Joseph Kilikevice.
2022 Fra Angelico Award Recipient
Gerardine Mueller,OP
Proclaiming Sacred Scripture by means of art has been the life work of this multi-talented, sublimely gifted, prolific Dominican artist, Masterpiece works have been created in stone sculpture, wood, clay, mosaic, copper, enamel, stained glass, illumination, glass etching, and calligraphy – all of which are filled with color and joyful imagery. Viewing this artist’s work, admirers not only are drawn to the beauty of the art but also to the soul of an artist deeply in love with her God. With a passion, this artist has preached and taught beauty and truth to a vast audience here in the United States and across the globe.
In 2017, Caldwell University opened, dedicated and named its new gallery in her honor and on September 16, 2021, this gallery opened an exhibit titled “Imago Dei” which featured and highlighted her work and legacy. The date of the opening was also this artist’s 100th Birthday. Even today, if you are looking for her, you most probably will find her in her studio creating art and this as she approaches her 101st Birthday.
It is with great pleasure that the Dominican Institute for the Arts presents the 2022 Fra Angelico Award to a woman who has spent her entire life preaching God’s Word through art, Dominican sister of Caldwell, Gerardine Mueller. 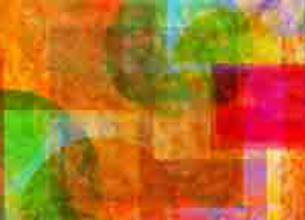